Home/Mariachi Band/Mariachi 102: The History of Mariachi Group Clothing
Previous Next

We are continuing with our previous blog post about Mariachi history in Mexico.

The History of Mariachi Group Clothing

Since the 1930’s, the Mariachi outfits consisted of a short-cut jacket and wool boot-cut pants to allow the wearer to don riding boots. Often the outfit is black with white or gold trim but can be seen with red coats or pants as well as other various colors. This ensemble is called a traje de charro. Previous outfits were called calzones de manta and huaraches. These outfits were white cotton pants and shirts with leather sandals. This was meant to resemble and represent the clothing lowest class in Jalisco wore. 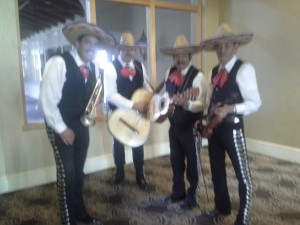 Mariachi was not always as popular as it is today

Due to this style being the music of the country people, they were not considered professional until the 1930’s and the slight variances in styles stayed in their respective regions. Before the 1930’s a Mariachi was asked to play a presidential inauguration in Mexico City and after that, the Mariachi was considered significantly more professional.

Today and in the earlier days, Mariachi plays on various occasions. For instances of courtship, Mariachi will play serenatas (translation: Serenade) in situations where a young male seeks the affection of a young female but they are not allowed to see one another. In this circumstance, the male will hire Mariachi to send a message of love to his sweetheart. On days of celebrations multiple Mariachis will be placed throughout the streets, often below windows of citizens, the celebration involves, to play music.

In the Mexican tradition, Marichi is heavily involved in the Roman Catholic Church Mass service. A Mariachi folk mass (Misa Panamericana) is sung in Spanish and uses traditional Mariachi instruments to interpret the service. This idea began in 1966 by the Canadian priest Father Juan Marco Leclerc and it took off and is now very common throughout the US and Mexico.