What You Should Know About the Legendary Mexican Hat Dance

What You Should Know About the Legendary Mexican Hat Dance

The Mexican Hat Dance is well known throughout the world as the national folk song of Mexico. Most of the time when people are asked to name a song related to Mexico, they mention this song. Along with other songs like “La Cucaracha”. 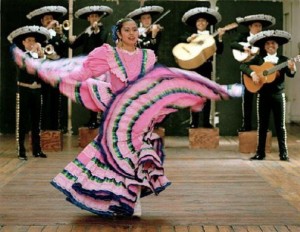 Here’s what you need to know about the dance

The popularity of this song and dance came from Anna Pavlova from Russia. This ballerina visited Mexico in 1919 and was so enthralled and passionate about the culture and costumes that she began performing the dance now performed throughout Mexico in the on pointe style while wearing a China Poblana outfit.

Mexican culture embraced this with honor and placed it in permanent importance in the culture. The dance was created during the revolution at the beginning of the 1900s to encourage national unity. The Jarabe style of dance in which the Mexican Hat Dance thrives is a combination of different styles of dance and song.

Costumes for the Mexican Folk dance

Costumes for men and women were not created simultaneously. The “standard” outfits worn for this style of song and dance hail from the 1800’s servant outfit (China Poblana). It was worn by the women and the charro suit worn by men during the 1930 emergence of Mariachi. Different combinations have been utilized throughout the history of the dance, but today it features a mixture of time periods, much like the style of music and dance this wonderful experience utilizes.

This style does not need to be performed by a set number of people. A solo performer is just as welcome to dance in this way as a large group at a party, however, the styles differ.

Contact Mariachi Alegre De Tucson for your next big party. And when we perform the Mexican Hat Dance, all your guests will get excited to perform and watch this traditionally wonderfully fun dance. Who knows? Maybe some of our Mariachi members will grab you by the hand and teach you the dance personally. Embracing the Mexican culture and pride is only one way to make a party one to remember!