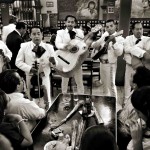 Seranatas may be one of the most romantic ideas you have ever heard. If you are a girl, you will probably agree that having a group of handsome men singing love songs to you and you alone, is just about as good as it gets.  In the old days a seranata, which is just the Spanish word for serenade, the tradition went like this. A young man who was “courting” a young lady would gather up some musicians and singers, and take them to his girlfriend’s house on her birthday.  The catch was that all this took place at 2 or 3 o’clock in the morning.  So, while the girl was sleeping, the boy and his accompanists would get as close to her window as they could, and they would sing a love song to her and dedicate it to the girl with all his love.  Are you swooning yet?

“Wake up, sweet love of my life. Wake up if you find yourself asleep”.

Then, continuing along with the tradition, the girl would come to her window and throw a kiss to her beloved.  In later times, she would thank him the next day.

Another good reason for a seranata was when a boy was too shy to tell a girl that he liked her.  So, after a couple of glasses of wine, he would get his musical companions to go with him to tell the girl of his, as yet, unspoken  love.  The next day, he would eagerly await her response, negative or positive.

Also, at times, the seranata would be a last ditch effort to restore the love of a girlfriend after a fight.  The songs the scorned lover would choose were songs that asked for her forgiveness and a return to their status quo.  At other times, the guy would ask the musicians to sing songs along the lines of “I really don’t care if you like me or not anymore”.  The opposite of romantic, no?

Another good reason for a seranata was when a boy liked a girl, but the girl’s parents did not like the boy.  In this case, seranatas could be set up to take place on a regular schedule for weeks.  This was to get the girl’s parents to see that he would persist until they gave him their blessing to “date” their daughter.

Another twist was the seranata that was trying to persuade the girl to dump her current boyfriend and start dating the guy who was sponsoring the seranata.  Hmmm… Doesn’t seem quite kosher, does it?

Whatever the reason you would like to have a seranata for your loved one, Mariachi Alegre de Tucson is the band to employ.  They can do seranatas that will accomplish any of the goals discussed.  They have songs that will break the heart, melt the heart, and change the heart, of any damsel within hearing distance of the tunes.